Stocks on the Tel Aviv Stock Exchange went into freefall Sunday with energy and infrastructure conglomerate Delek Group leading the rout, dropping by 35 percent at one point before recovering to -29% as the oil and gas sector took a pounding on weak demand as a result of coronavirus fears.

Israel’s national air carrier El Al was down 8% after reporting that it expected losses of $140-160 million in the period from January to April 2020 as a result of having had to close several routes due to the virus outbreak and reduced demand on other lines. 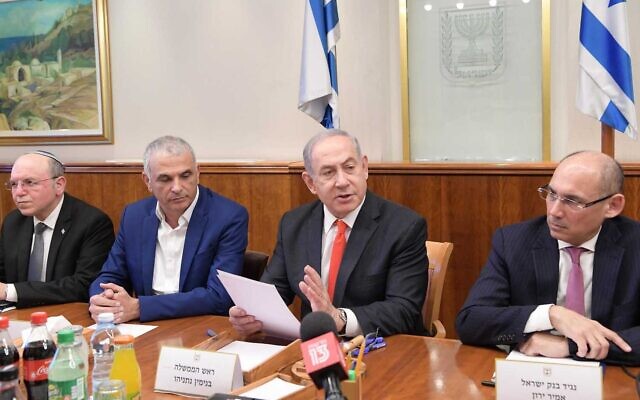 Prime Minister Benjamin Netanyahu leads a discussion on the economic impact of the coronavirus in Jerusalem, March 8, 2020. (Amos Ben Gershom/GPO)

Amid the economic and market turmoil resulting from the rapid spread of the coronavirus around the world, Prime Minister Benjamin Netanyahu said Sunday that the government would set up an emergency fund to provide cash flow relief to vital industries.

“We head into this crisis with the economy in a very sound position and that, of course, is an asset when compared to the situation in almost all Western states. The bad news is that no one knows just how far this epidemic will spread and what cost it will exact from an economic point of view. Therefore, we are preparing ourselves to deal with what has already happened and with what may yet happen.

“The first step that I am announcing today is that by next Sunday the Ministry of Finance will set up an emergency fund to provide cash flow relief to businesses that are vital to the functioning of the economy. The next step will be, depending on how the crisis develops, that the treasury, in coordination with the Bank of Israel, propose tools to provide cash flow relief to businesses experiencing stress as a result of the crisis.” 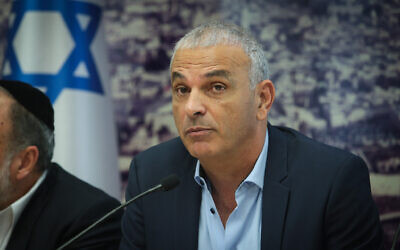 Following his statement, Netanyahu held talks with a number of senior officials, including the governor of the Bank of Israel, Amir Yaron, and Finance Minister Moshe Kahlon, who earlier tweeted that he would be presenting plans to provide credit to businesses.

Kahlon also called on businesses to allow employees to work from home to prevent the spread of the virus and ensure minimal disruption to the economy.

Channel 13 News meanwhile reported that Intel, Israel’s largest employer in the high-tech sector, had instructed its employees to work from home and not report to company offices.

However, the Israel Airports Authority on Sunday announced massive cutbacks in response to the coronavirus’s devastating effects on air travel.

The authority said it was putting 70% of its temporary workforce on unpaid leave and overtime has been canceled for all employees. To protect those with families, it was decided that single employees would be put on leave first. Senior management has announced it is forfeiting 50% of its bonuses as well.

AP contributed to this report.