NZDUSD consolidates near session highs. What are the technicals saying?

Nearly retraces the move down from the high yesterday

Adam in an interview on Kitco yesterday, spoke of the RBNZ and how they said they were looking to monetize the government debt. That would be a bearish development (see video here) all things being equal.

What are the technicals saying? 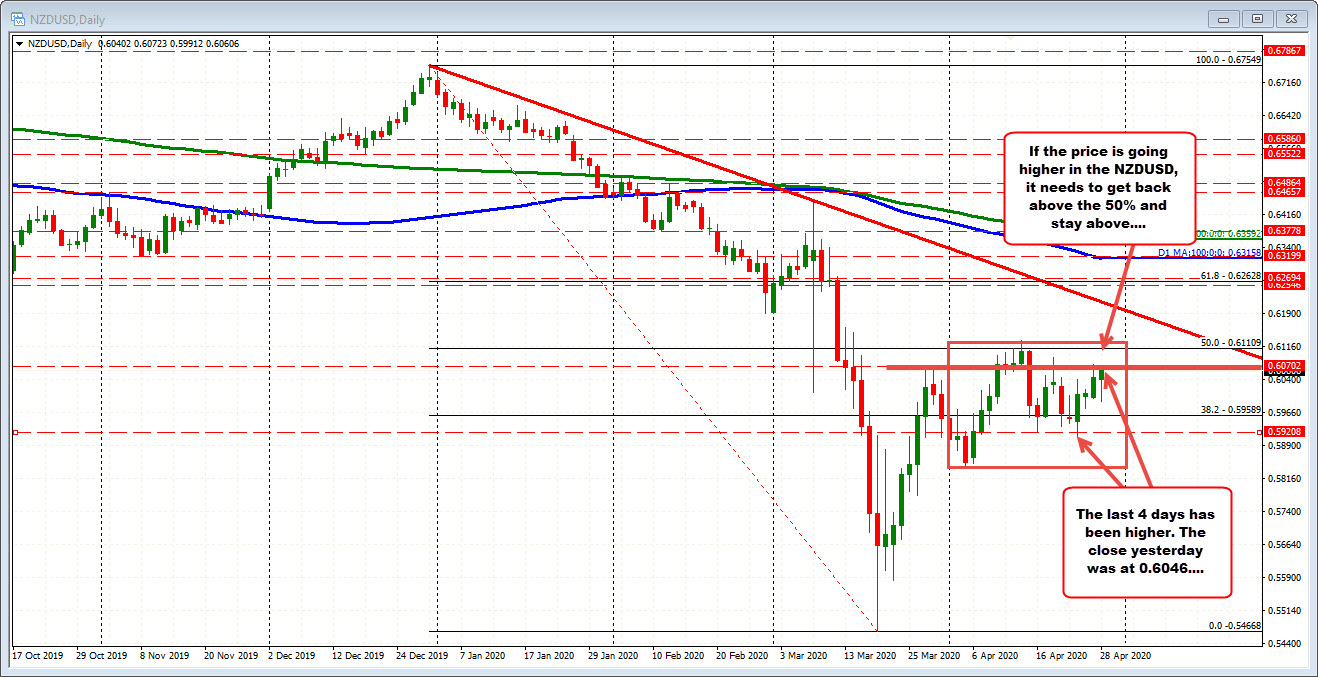 Looking at the daily chart below, the price today is higher on the day (close at 0.6046) . The pair currently trading at 0.6070.  The high price today is just off the high from yesterday (high today 0.6072, and high yesterday was up at 0.60746).  The low today did move below the low from yesterday, but there has been sharp move back to the upside.  It’ will take a move below the close to hurt the bias. Until then, the price is higher on the day for the 4th day in a row.

The not so bullish is the corrective move off the March low has stalled near the 50% retracement of the move down from the end of December high at 0.61109.  Back on April 14, the price moved above that 50% level, but could not sustain the upside momentum.

So overall, looking at the daily chart, the price is up 4 days in a row, but if the buyers are to take more control, getting and staying above the 50% retracement is key.  That has not been done yet.

Drilling to the hourly chart below, what are the technical saying on that chart (see below)?

The high yesterday moved modestly lower into the close and fell sharply lower in the Asian session today. That move took the price to the 100 and 200 hour MAs (blue and green lines currently at 0.6009 and 0.6005), AND the 50% retracement of the move up from the low last week at 0.5992. Buyers came in, stalled the fall and pushed the price sharply higher. Holding support there was a bullish move.  The subsequent run back toward the high from yesterday, has only been stopped by the sellers against that level. However, if it can hold, you can’t rule out the buyers turning to sellers again.

So overall, the daily chart is mixed. The hourly chart is a bit more bullish given the price holding the 100 and 200 hour MA and the 50% earlier today.  Having said that, with the high from yesterday still needed to be broken, the caveat for the bulls, is to get above that level.

If selling is your bias, traders can lean here, but on a break above, I would not mess with it, until perhaps the midpoint from the daily at 0.61109, or a failed break.

On the downside, the first clue today would be a move below the close from yesterday at 0.6046. Get below and stay below now, and the buyers may give up (and the sellers may look to take more control).