Netflix earning after the close

Netflix, one of the stocks that have benefited during the coronavirus correction, will report earnings after the close.

Of all the stocks, the reaction for Netflix can be influenced by a lot of different metrics. The general expectations is for adjusted earnings of $1.87 per share on $5.74 billion in revenue. In addition to those numbers, the analysts expect 7.69 million global paid subscriber. That is an increase of 17% vs a year ago.  The company will also come out with statistics for domestic and foreign subscribers.

Netflix numbers were boosted by the success of the Tiger King documentary (I could only watch about 10 minutes before I turned it off), and from home shuttering across the globe. 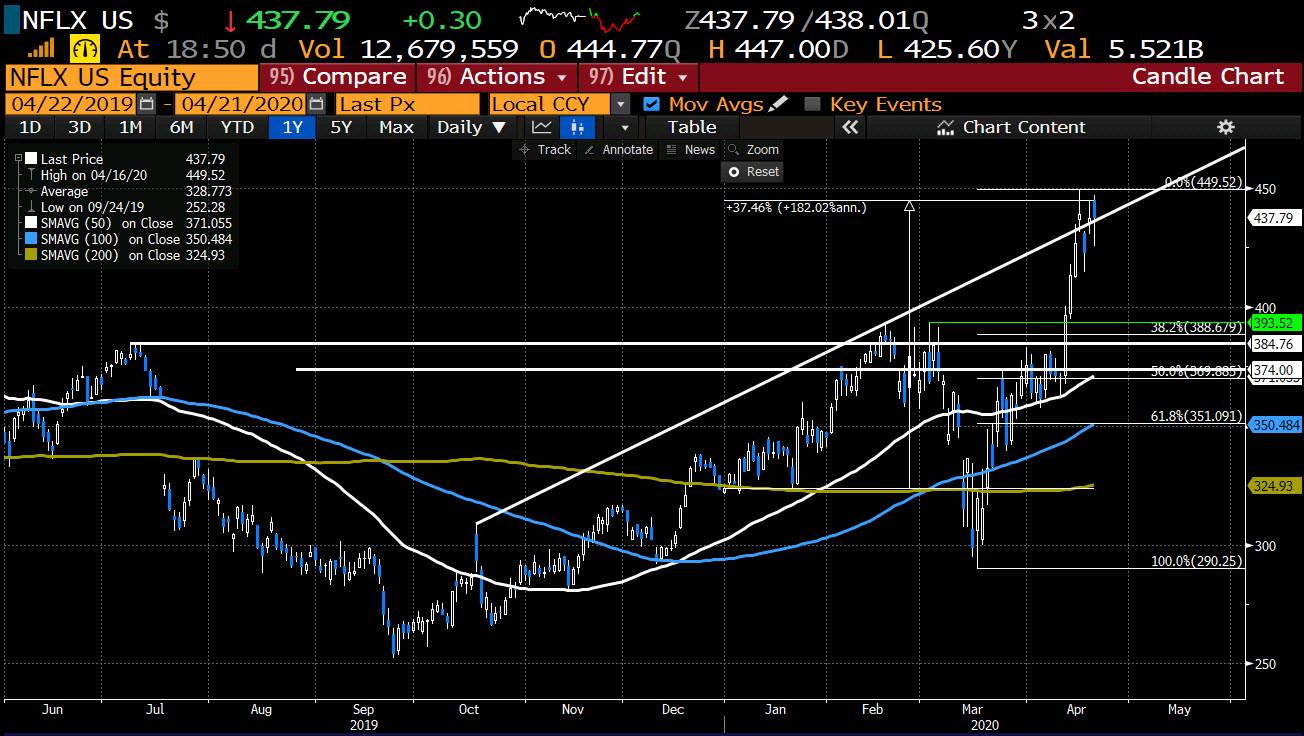 Options traders have priced in a move of 13-15% before week end.  It was reported that one option trader bet $1M that the price would reached over $500 by June.  With the price at around $440 currently, a 15% gain is about $66 move up or down.   So the option call play (paid $25 for $475 June options or $500) would reach that level to the upside if it indeed reached that implied volatility move.

On the downside, the price would reach around $375.  That’s quite a big range.

The price of Netflix is up about $37% from the end of year closing level.   Technically, the price rise over the last week moved to $449.52 and above a topside trend line (around $437 currently).   Stay above that level is the best case scenario technically.

On a move lower, the 38.2% of the move up from the March 2020 low comes in at $388.68, The high from March reached $393.52 which is around that level. Should there be a sharp selloff, I would expect some dip buyers near that area.  A normal correction, could head down to those levels if numbers disappoint (or quite frankly if the longs get squeezed out on a corrective move).

With the price up so high this year, the inkling is buy the rumor, sell the fact, but what we know is risk is sky high.

Also after the close, Chipotle and Snap will report earnings.

‘One day everyone will use China’s digital currency’ – BBC News