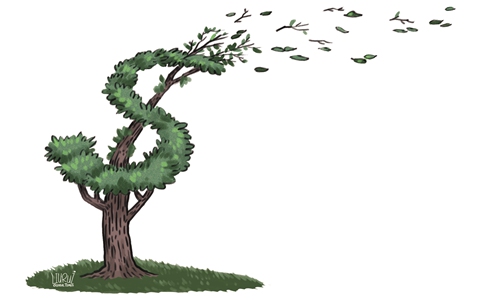 A global trend toward “de-dollarization” has already begun. The last piece of “load-bearing wall” of the “US Empire State Building” has cracked, in other words.

Global policies for “de-dollarization” include sharply reducing US debt holdings, dropping US dollar’s status as an anchor currency, increasing non-dollar bulk commodity trade, growing the reserve of non-dollar currencies, and ramping up gold’s hedge against the dollar.

From the perspective of US debt, 22 consecutive months from April 2018 to March 2020 saw global central banks reduce their US debt holdings. In March, the US Federal Reserve pledged unlimited quantitative easing, purchasing over $1 trillion Treasuries within a month. The Federal Reserve has become the largest receiver of US Treasuries.

In March, yields on both one-month and three-month Treasury bills were negative, while the yield for the 10-year Treasury hit below 1 percent for the first time, according to media reports. This exemplifies global anticipations of a weaker US economy.

The possibility cannot be ruled out that a small number of foreign investors in the short run will increase their holdings of US Treasuries. However, in the long run, overseas investors will likely reduce their US debt holdings. The Federal Reserve, which has spent over half a century building its global credibility, has become the last ditch of US Treasuries.

In recent years, many G20 members, such as China, France, Germany, and Russia, have reduced their utilization of the US dollars in trade deals.

According to information disclosed by the Society for Worldwide Interbank Financial Telecommunication (SWIFT), in May, the share of US dollars in the international payment market was 40.88 percent, a drop from 44.1 percent in March.

The market estimates that although there is a long way to realize “de-dollarization,” other countries are becoming restless to achieve it.

The SWIFT system, which has been traditionally used for trade clearance and payments, and which is overwhelmingly controlled by the US, has been widely criticized across the world. Many countries are striving to construct de-dollarizing payment systems. For example, China launched the Cross-border Interbank Payment System in 2015. It is very likely that the share of US dollars in international payment systems will drop to below 40 percent.

To offset risks brought by US dollars, the US share in global gold reserves fell from 23.64 percent at the end of June 2019 to 15.5 percent at the end of June 2020. This reflects countries’ weakening of trust in the US dollar. It is conceivable that the US sanctioning against China due to the country’s national security legislation for Hong Kong will further accelerate most countries’ “de-dollarization” programs.

In addition to US Treasuries, payments as well as foreign reserves, digital currency is the latest factor that affects the “de-dollarization” progress. Digital currency seeks a comprehensive replacement of the US dollar as the primary international currency in terms of issuance, technology, and tools. Major economies including China, the EU, and Japan, plus many multinational corporations, have conducted long-term digital currency research.

Since the 21st century began, many doubters of “de-dollarization” have been holding that global “de-dollarization” is still in its infancy. They feel markets are mainly dependent on the US dollar. But the COVID-19 pandemic seems to have triggered a faster “de-dollarization” progress. Considering other countries’ diplomatic decisions and the market’s expectations for the US dollar, one can judge that the US can never form a strategic containment circle against China.

China is confident in this.

The author is professor and executive dean of the Chongyang Institute for Financial Studies at Renmin University of China, and executive director of China-US People-to-People Exchange Research Center. wangwen2013@ruc.edu.cn